Headlines - that's what the Dutch hard bop sextet The Houdini's made in the national and international jazz press after having played the prestigious 1989 North Sea Jazz Festival. The authoritative American jazz magazine Down- Beat even proclaimed them 'equals of the young jazzers of New York', words of praise summing up their capabilities rather nicely. Re-evaluating that first album and their sophomore effort Headlines , the 21st century jazz buff really gets a blast from the past. The Houdini's played hard bop as if they had invented the genre – and they still do so.

It was Gert-Jan Blom – nowadays artistic producer of the renowned Metropole Orchestra – who 'invented' the hard bop sextet for the 1987 Canada tour of the Boulevard of Broken Dreams Festival. Back in Holland The Houdini's start gigging and recording in the original line-up consisting of alto saxophonist Rolf Delfos, tenor saxophonist Boris Vanderlek, trumpeter Angelo Verploegen, pianist Erwin Hoorweg, double bass player Stefan Lievestro and drummer Pieter Bast. Subsequently the band released the debut album Live at the Paradox, an overpowering example of the group's energy and creative power.

In 1992 The Houdini's, in their new line-up with bassist Marius Beets and drummer Bram Wijland, cross the ocean to record Headlines in the temple of jazz: Rudy van Gelder's studio in Englewood Cliffs. Their second New York album Kickin' in the Front Window followed in 1993. During both visits to the Big Apple the band successfully played the NY club circuit, an exceptional feat for a Dutch ensemble. Soon after the recording Vanderlek left the band and was replaced by Barend Middelhoff, with whom they recorded their Challenge debut Hybrid, highlighting the forward looking single No more Yesterdays. Next to 'radio friendly' jazz The Houdini's also explored the more serious side of business. Collaborating with the Amsterdam New Sinfonietta Orchestra the band presented an ambitious Porgy & Bess program in Dutch theatres and concert halls. With George Gershwin's genius fresh in mind they decided to consecrate a full album to the five gods of the Great American Songbook: Irving Berlin, Cole Porter, Richard Rogers, Jerome Kern and, of course, George Gershwin. Once again they departed for the United States to present The Houdini's Play the Big Five to American audiences in New York, Birmingham (Alabama). By the mid nineties the Houdini's performed all over the globe.

During their tour of Australia and Tasmania they played 21 gigs in a month's time. To give an impression of their electrifying performances down-under we included three no-nonsense live tracks recorded on that tour. Their tenth-anniversary-album Cooee marks a moment of reflection, with a more contemporary-improvised-music angle. With the 1999 Stripped to the Bone album The Houdini's are back on the hard bop track with a major change in the horn sound: after Barend Middelhoff's relocation to Paris, the band opted for a trombone in the front-line, a role for Martijn Sohier and, later, for thecurrent trombonist Ilja Reijngoud.

Meanwhile the band engaged in numerous musical adventures. The sextet performed an original live soundtrack accompanying the screening of the Buster Keaton movie The General, recorded the platinum selling album Strange Fruit with the Dutch top vocalist Trijntje Oosterhuis, hosted matinees at the famous Amsterdam Concertgebouw, collaborated with classical greats like the Schönberg Ensemble and composer/conductor John Adams, played with the Jazz Orchestra of the Concertgebouw and so forth, and so on.

Recently they recorded an album with the very talented jazz singer Kim Hoorweg, the young daughter of piano player Erwin Hoorweg. As a fourteen-year-old teenage prodigy Kim recorded the Ella Fitzgerald album Kim is Back! for the prestigious Verve label, a feat that made her the youngest female artist in the label's history. With her father's Houdini's she presented the Peggy Lee tribute Why Don't You Do Right. Tracks like It's All Right with Me or Shady Lady Bird uncover the vigour she has brought to the band. While re-inventing fifties jazz, the now twenty-year-old singer and the twenty-five-year old band establish a genuine hand-in-glove chemistry. It's a blast from the past that still makes the headlines and deserves a big future. 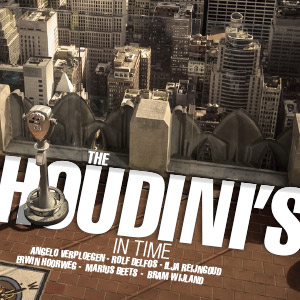