The Houdini's Play the Big Five

All selections arranged by Hoorweg, Verploegen and Delfos.
Special chorus in Slap That Bass by Beets.

Playing together for eight years, performing at home and abroad countless times and producing four previous CDs (two of wich were recorded by the legendary Rudy van Gelder in New Jersey, USA) with practicallyonly original material gives us the feeling that, havingachieved al this, we are ready to present an album of standards only, without having to give up our musical identity (highly cultivated ensemble playing, a certain openness towards the repertoire and widely divergent solo contributions) .The immediate cause for this project was a concert tour (the premiere being at the Amsterdam Concertgebouw) with the renowned string orchestra Nieuw Sinfonietta Amsterdam, conducted by the American conductor Richard Dufallo. On this occasion the ensembles together performed a suite from Gershwin's Porgy and Bess (live CD on Channel Crossings, CCS 8395) and for their solo presentation The Houdini's selected compositions by Gershwin's most important contemporaries (Berlin, Kern, Porter and Rodgers; together with Gershwin, 'the Big Five') 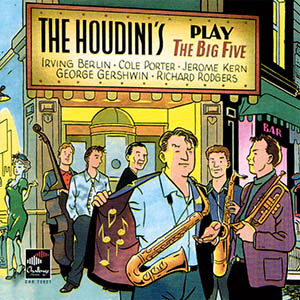