THE HOUDINI'S is the name of a most dynamic jazz-sextet formed by Holland's finest young jazz musicians. The three horn players (Angelo Verploegen; trumpet and fluegelhorn, RolfDelfos: alto sax and soprano sax, Boris Vanderlek. tenor sax). all from Amsterdam, are working together for several years now. In 1986 they recorded the soundtrack of the Dutch movie 'Blonde Dolly" (WEA 242 084-1) and in 1987 they joined the "Boulevard of Broken Dreams Orchestra" with which they recorded the album "Dancing with tears in my eyes" (Idiot records 832 714-1) and toured through Europe and Canada.

It was the musical director of this orchestra who came up with the idea of putting a hardhop-sextet together for this tour and named it THE HOUDINI'S Back in Holland a new rhythm section joined THE HOUDINI'S consisting of Erwin Hoorweg: piano and keyboards. Stefan Lievestro: double bass. Pieter Bast: drums.

In this final form THE HOUDINI'S started playing in the most important jazz-clubs in Holland and on most festivals like HEINEKEN JAZZ FESTIVAL in Rotterdam and NORTH SEA JAZZ FESTIVAL in The Hague. They also appeared live on the radioshows JAZZSPECTRlM and TROS SESJUN.

The repertoire of THE HOUDINI'S consists of less well known. existing hard-bop material like Al Beletto's medium-up "Relaxin' ", Ray Bryant's shuffle "Tonk", the up-tempo "Duck Soup" by Donald Harrison. "Caravan" in the arrangement of Freddie Huhbard as well as original compositions like the shuffle "Big Art" specially written for THE HOUDINI'S hy the famous Dutch drummer and vibrafonist Frits Landesbergen or the beautiful medium-slow "Kaatje" by Erwin Hoorweg. 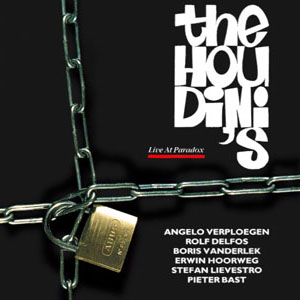