Why Don’t You Do Right?

Why Don’t You Do Right? - A Personal Note
Time is of essence. That goes for music, for sports cars, for life.
In music, time determines whether a tune is fast or slow, whether the band is together or not, if it swings. Time’s intangible, invisible, it doesn’t exist and yet it’s one of the most important factors in music. As an individual musician and even more so as a band you have to reach consensus about it, as much as about tuning, dynamics, phrasing, articulation, balance. We refer to it as timing: “don’t rush that phrase” or “lay back on those two notes” or “make sure you don’t come in early with that background” or “please try to hit that chord exactly on the 2”. Time can be a teasing, exciting or surprising element in music. Looking for examples backing all of this up? Just check out how the horn-pattern works out in Where or When, or how a 5/8 signature seems to fit Lover just perfectly, or the shifted bass pattern in Johnny Guitar, or the coda of You Oughta Be Mine, or the tempo of the title song of this album Why Don’t You Do Right? When it comes to sports cars in relation to time, well, they just need to go fast. And I’m afraid the closest we will ever get to those is watching an episode of Top Gear.

In life, time is implacable too. The Houdini’s have been around for almost a quarter of a century now. But hey, what’s 25 years, compared to the life of ephemera, just living for one day, or the life of a sea turtle, very likely to outlive most of us. At this very moment it’s hard to realize that Kim didn’t even exist when The Houdini’s did their first recording session at Rudy Van Gelder’s in New Jersey; that she was still a baby when we went back to Van Gelder to do another album; that she was a toddler when we continued touring Europe, Northern America, Australia; that Kim was still a kid when The Houdini’s did their Amsterdam Concertgebouw series with John Adams, Amsterdam Sinfonietta, Louis Andriessen, Jazz Orchestra of the Concert- gebouw, Schönberg Ensemble.

And then, December 2002, Kim reaching the age of 9, the first encounter. Kim coming with Erwin to the rehearsals of the Billie Holiday project of string orchestra Amsterdam Sinfonietta with The Houdini’s and renowned singer Trijntje Oosterhuis. From then on, time caught up with all of us. Within just a few years Kim reaches the status of almost being a veteran herself, with already two internationally released solo-albums of her own, and this one being her third release, having reached the age of 18.

And again the elusiveness of time. Kim fits in. Despite of the 30 years or so difference in age, she is actually one the guys – as good-looking, big mouthed, hardheaded and golden hearted ;-). And as energetic and hard swinging as The Houdini’s always have been. The professional collaboration of The Houdini’s and Kim started a year ago with the theater show Fever – a Tribute to Peggy Lee. Instead of trying to redo Peggy Lee’s legendary performances, we had her versatile repertoire merely serving as a pool in which to find proper common ground for both parties’ musical satisfaction. Erwin had the arrangements done in no time and we had a ball playing the theaters and festivals. Time flew and here we are presenting the recorded outcome of an effortless merge of two generations. Kim and The Houdini’s, a timeless combination. We had a great time recording this album and we all sincerely hope you will have a great time listening to it. 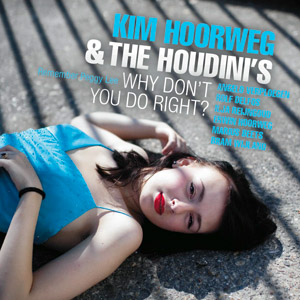